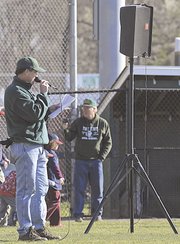 Fort Hunt Little League President Paul Murphy leads the Opening Ceremony. This is his 10th year as president and he played for the league in the 1970s.

Fifty-one teams were introduced in front of a crowd of family and friends. Each team got took a quick trip halfway around the diamond and lined up. 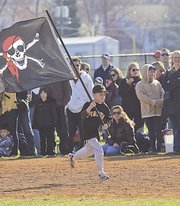 A member of the Pirates team carries the team flag. There are 586 youngsters registered for Fort Hunt Little League.

Members of the Fort Hunt Sportsman Association presented the league with a contribution. 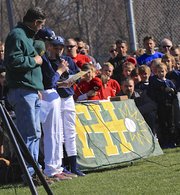 Joined by the League President Murphy, two players lead the teams in the Little League Pledge.

Another fun shot of a team running around the diamond as the crowd looks on.

Another team, the Tigers, takes their turn running around the diamond as their family and friends cheer. 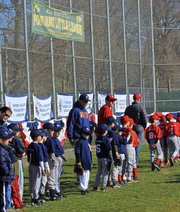 After the teams were introduced, they lined up near the team banner.

Almost 600 Little Leaguers participated in the parade of teams, gathering at home plate to recite the Little League pledges for players, parents and volunteers. Fort Hunt Little League President, Paul Murphy, presented the 2012 Paul A. Massey Volunteer of the Year award to Jeff Bigler for his years of service to the league and community. Bigler was instrumental in several key areas, including providing T-Ball fields, developing the league’s annual Home Run Derby fundraiser, and managing a Juniors All Star District 9 championship team.

West Potomac High School Varsity Head Coach Jim Sullivan and several former Little Leaguers now playing baseball on the West Potomac Varsity team were present as well. Sullivan noted that West Potomac’s Varsity team is off to a strong start and he is looking forward to a great season. He recognized Fort Hunt as an important part of the team’s success due to the skills first developed in Little League. The Fort Hunt Sportsmen’s Association, a non-profit club dedicated to the support of local youth sports, presented a donation to the league.

The Fort Hunt Little League will hold its annual Home Run Derby, its largest fundraiser, on May 18.