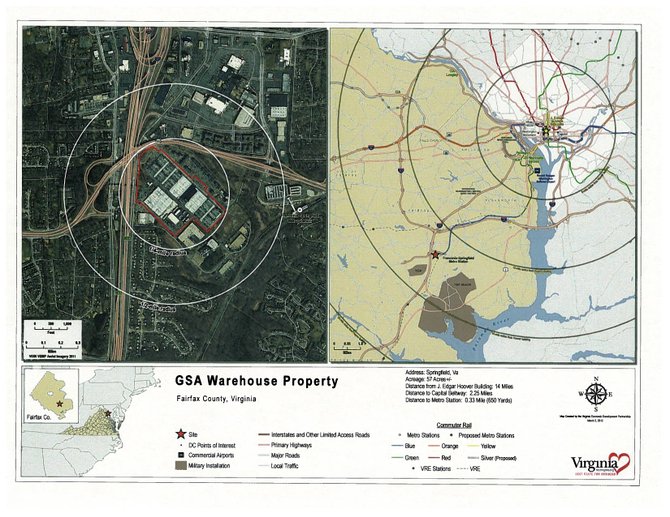 The General Services Administration warehouse site, which Fairfax County is proposing for the relocation of the new FBI headquarters, is located in Springfield, near four million square feet of office space and bordering the Franconia-Springfield Metro Station.

Virginia Gov. Bob McDonnell publicly endorsed the Springfield warehouse site for the new FBI building headquarters, supporting Fairfax County in its bid for the new headquarters. The move is expected to bring at least 12,000 jobs and a $1.2 billion complex to Northern Virginia.

In an April 30 letter to FBI Director Robert Mueller and Dan Tangherlini, the acting administrator of the U.S. General Services Administration (GSA), McDonnell said the federally-owned warehouse 57-acre site is the best choice for a number of reasons.

THE GSA ALREADY OWNS the Springfield warehouse property, which will save the government more than $44 million per year in lease payments and make the transaction "both clean and easy," McDonnell wrote in the four-page letter. The site also satisfies the FBI’s stringent post 9/11 security guidelines.

"In short, the GSA Warehouse property is a natural solution to satisfy the December 2011 Senate resolution and meets the organizational goals of the FBI as stated in a recent congressional hearing."

"In short, the GSA Warehouse property is a natural solution to satisfy the December 2011 Senate resolution and meets the organizational goals of the FBI as stated in a recent congressional hearing," McDonnell wrote.

McDonnell, who is reportedly under investigation by the FBI for gifts he allegedly received from a campaign donor, invited Mueller and Tangherlini to accept his personal invitation to visit the site "at your convenience to discuss its unique attributes with community leaders and state officials."

McDonnell outlined many of those attributes in the letter, including the intelligence community’s "considerable footprint in the commonwealth." He also noted the Springfield location would allow collaboration with Fairfax County’s nine federally-funded research and development centers and 10 laboratory consortium partners.

The FBI is currently headquartered in the J. Edgar Hoover building.

"We are confident collaborations with these and other partners will result in the development of new technologies for law enforcement and intelligence gathering, thus greatly advancing the FBI’s national security mission," McDonnell wrote.

McDonnell also took the opportunity to tout the General Assembly’s historic bi-partisan transportation bill this session, a bill, McDonnell wrote, "that will provide for billions more in new funding for Northern Virginia alone in the next five years."

"The governor’s support is consistent with the unanimous endorsement of the site by the Fairfax County Board of Supervisors," Supervisor Jeff McKay (D-Lee) said Friday. "I thank Gov. McDonnell for recognizing all the reasons why this should be an easy decision for the federal government, and for further highlighting the reasons why Springfield makes the most sense for the FBI."

Fairfax County board members have been lobbying FBI and GSA officials for more than a year.

IN JANUARY 2012, Fairfax County joined Prince George’s County and the district in placing its marker on the table in the high-stakes competition soon after the Senate passed a resolution authorizing the GSA and FBI to seek new headquarters in December 2011. The new headquarters would consolidate more than 21 separate locations and relocate the FBI from the J.Edgar Hoover Building at 935 Pennsylvania Avenue, built in 1975 and in deteriorating condition.

McKay said the benefits to the federal government of relocating to Springfield "would be substantial."

"The FBI needs 2 million square feet of office space, located within two miles of a Metro station and within 2.5 miles of the beltway according to the GAO. Redeveloping existing sites in DC would be extremely expensive, especially given the post-9/11 security features that are now required. … It is adjacent to the Franconia/Springfield Metro Station, VRE, AMTRAK, bus service, and every highway except Route 66." He pointed out that airport access will soon be served by two Metro stations once Rail to Dulles is complete.

"In addition to the high paying jobs that would come to the area, redevelopment of this site could spur construction of other office projects nearby and expand our commercial tax base," he said. "You just can’t pick a better spot than Springfield," McKay said.

According to Fairfax County officials, the GSA has received 35 responses to its request for information by its March 4 deadline, and is continuing to study those requests. The GSA is expected to begin accepting formal requests for proposals this summer.