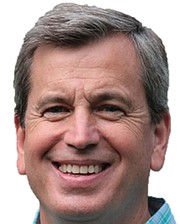 Education: BA from Amherst College, JD from the University of Virginia

I am a proven leader on the issues that matter most to my constituents, including developing Virginia’s clean energy industry, nonpartisan redistricting, Medicaid expansion, sensible gun safety policies, protecting a woman's right to choose, and ensuring equality for all.

I worked with my Republican colleagues last session to address the sexual assault issue at some of Virginia’s colleges. I introduced a bill which required universities to establish a Memorandum of Understanding (MOU) with local sexual assault crisis centers outside of the university. I was able to get portions of my bill into the legislation which ultimately became law.

The 48th District was re-drawn in 2010 to include parts of McLean and Arlington. It is a district with a well-informed electorate, concerned above all with ensuring that our community remains the very best place to live, work, play, and raise a family.

Yes, I support Medicaid expansion. It is unfortunate—if not scandalous—to see many of the leaders in Richmond carelessly throw Virginia’s tax dollars away without getting anything in return. It’s time we ended the partisan showdown over Medicaid expansion and did what is best for the hundreds of thousands of working Virginians who are without health care.