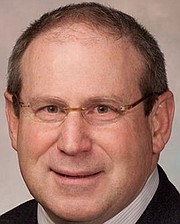 Occupation and relevant experience: As a part-time legislator, Delegate Sickles works full-time for a national marine construction company based in Metropolitan New York.

Community involvement: In civic life, Delegate Sickles was appointed by Supervisor Joe Alexander and Supervisor Dana Kauffman to the Fairfax County Library Board, serving for 11 years and one term as Chairman. In his two years as Chairman (1998-2000), Mark oversaw the opening of a new library in Kingstowne and the development of a ten-year capital improvement plan that resulted in the renovation of the Richard Byrd and Martha Washington libraries and acquisition of over seven acres for the future development of a regional library on Beulah Street near Manchester Boulevard. He also served as President of United Community Ministries – a social-service non-profit providing employment services, aid to the homeless, and high-quality daycare to low-income children – during a six-year term on its board. He is currently on the Aerospace Advisory Council and the George Mason University of Conflict Analysis and Resolution’s (S-CAR) Advisory Board. He is an active member of the Bioscience Caucus. He was formerly a member of the Substance Abuse Services Council and Gov. Warner’s Commission on Military and National Security Facilities.

I was born and raised in Northern Virginia and observed first hand a dynamic region that grew faster than public infrastructure could sustain. The fight to ensure that Northern Virginia gets its fair share in order to catch up has defined my service. It is my hope to keep Virginia the type of place that anyone would want to call home. My family built a life here and I want ensure that it continues to be the best place to work, play, and to educate the next generation. I value the partnerships and working relationships developed over the previous twelve years and enjoy working to create our shared future together.

My opponent claims that she will represent the views and interests of every citizen of the 43rd District, but her personal ideology is fundamentally at odds with most of the core beliefs of my constituents. Her complete lack of respect for the institution of government makes me seriously question her commitment to protect and fight for critical services like Metro Reform, pre-k through 12 and higher education, and public safety. Unlike my opponent, I do not stand behind vague references to “freedom” and “liberty” to obfuscate my positions on guns and government regulation. Although some of my constituents may disagree with me, they at least know where I stand on any and every issue.

Given the political makeup of the state legislature, what examples from your own experience suggest you can successfully bridge the intense partisan differences there?

Following the trend of national politics, Richmond has become too divided along party lines. Despite this, I have been able to maintain a proven track record for bipartisanship. My recent appointment to the Appropriations Committee by Speaker Howell, arguably Virginia’s most prominent Republican, is a clear vote of confidence in my ability to work across the aisle. Although we may disagree on some fundamental issues, I believe my Republican colleagues and I have respect for each other, which allows us to work together to pass substantive legislation, such as the landmark 2013 transportation bill. HB 2313 passed because 25 Democrats and 35 Republicans set aside ideology to focus on the long-term interests of their constituents and Virginia’s future.

Expanding access to pre-k for at-risk children, by reforming the Virginia Preschool Initiative and increasing funding for the program.

Fighting for the right transportation priorities and improving Metrorail’s performance.

Ten years ago, we had many more trailers serving as classrooms in our schools. We did not have Jeff Todd Way, turn lanes at Harrison Lane, and a functioning intersection at S. Kings and Telegraph Road. We enacted a law that gives citizens hope that their street will be repaved within a reasonable time frame. The Commonwealth’s 16 four-year institutions of higher learning have built the capacity to handle the numerous students from Northern Virginia. We have made a big difference in the lives of many more families with disabled children. We continue to see expansion of quality development in areas like Metro Park and the Wegmans’ complex. All of these changes are a product of the close working relationship of your South County representatives. Our Local, State, and Federal delegation has secured funding, coordinated projects, and worked towards a shared vision of a community that prioritizes the needs of its constituents.

With the demise of payday lending in Virginia, and the passage of SB 606 in 2010, there has been an explosion of title lending under the new rules and interest rate caps. After five years of rapid expansion, it is clearly time to revisit current law. One thing we can do now is pass HB 2011, a bill that would have prohibited “a licensed motor vehicle title lender or third party from making loans under the chapter re-regulating consumer finance loans at any place of business where a licensee conducts the business of making motor vehicle title loans.”

I would very likely support a program that improves our essential foster care system. Historically, Virginia has been very aggressive at drawing down federal dollars. I welcome any program that maximizes federal funding to provide critical services to Virginians.

Closing the Coverage Gap is one of my top legislative priorities. Partisan gridlock has prevented the Governor from accepting Virginia’s own tax dollars for routine care of her poorest citizens by a Medicaid managed care company, or from using Medicaid funds to purchase insurance on the exchange. In furtherance of our reputation as a well-managed state, we need to accept our own tax dollars back so as not to irrevocably deny healthcare for up to 400,000 of our fellow working Virginians that live below the poverty line. Currently, uninsured people—mostly single adults from 19-64 years of age—receive “uncompensated” care in a hospital emergency room or free clinic. But there is no such thing as “uncompensated” care by health care providers. We all pay, via higher insurance premiums, for the cost of caring for the uninsured—there is still no free lunch.

Going forward, I will continue to work with the Governor as he drafts his first and only two-year budget. As a member of the Appropriations Committee, the Health and Human Services Subcommittee, and the Health, Welfare, and Institutions Committee, I will continue to support initiatives that efficiently spend our limited taxpayer dollars on mental health and other critical services to our poorest.