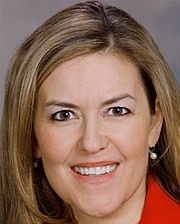 I am running for reelection to continue providing effective representation for the people of the 33rd Senate district. Voters want us to maintain the high quality of life that attracted them to Loudoun and Fairfax. For most people, that means quality schools and manageable commutes, so we need to invest in education and transportation. We must restore state funding for schools so that we can hire and retain the best teachers and keep class sizes small. We also need to reduce the number of SOL tests, to ensure quality classroom instruction time and reduce the amount of “teaching to the test.” In transportation, money earmarked for NOVA should be spent first on projects that best reduce congestion. The new proposal for tolls on I-66 is a bad one for my constituents, and I will oppose I-66 tolls, just as I previously have worked to lower tolls on the Dulles Greenway.

As a working mom with two sons attending Loudoun public schools, I understand the concerns of most people in the district. My background as a prosecutor and an attorney gives me a good understanding of the law, and how to evaluate and improve proposed legislation. Putting these things together, I have earned a reputation as a thoughtful legislator who focuses on creating sound policy and who puts partisanship aside to pass good laws. My opponent, on the other hand, touts the rigid ideology of the Tea Party. He wants to weaken public education, repeal the bipartisan transportation legislation that provides hundreds of millions of dollars for transportation projects in Northern Virginia, and opposes even the most basic of commonsense gun restrictions, like universal background checks.

In my 21 months in the Senate, I have focused on passing non-partisan, commonsense legislation that actually helps my constituents and people throughout Virginia. This is a key reason nine of my bills passed by both houses of the General Assembly and were signed into law in 2015. Among them, one guaranteed that women can legally breastfeed in public; another helped families with autistic children (Conner’s Law); and others made it easier to investigate and prosecute online sexual predators and child abusers. These aren’t “hot button social issues” but they make Virginia a better and safer place to live.

Loudoun County has been one of the fastest growing counties in America the past 10 years. Many people moved from inside-the-beltway to the 33rd District suburbs in search of nice houses, safe neighborhoods and good schools at a more affordable price. This has led to unprecedented growth in housing development, public school enrollment, and traffic.

Yes. I voted for the Marketplace Virginia plan that passed the Senate with bipartisan support in 2014, and will support similar legislation. That plan would cover 400,000 Virginians and bring Virginia more than $1.7 billion of federal tax dollars.