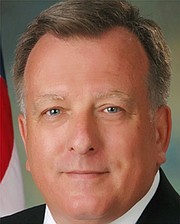 Candidate for Senate in the 36th district

Fixing the economy (economic development). If we are addressing economic development then infrastructure (roads, etc), schools and homes fall into place. Your Senator must work hand-in-hand with County and Town governments. Tax dollars must be put to work effectively and judiciously.

Leadership. As a 25-year Marine Corps veteran, a Mayor, a businessman and a consultant my experience is diverse and will bring a fresh perspective to Richmond. My opponent is a career Richmond insider and a politician who’s voting record doesn’t line up to what he says he supports.

I was elected as a Councilman and then as Mayor as a Republican in a town that President Obama and Governor MacAuliffe won in a landslide. That crossover appeal shows that I can work effectively across the aisle and earn the trust of Democrats. I attribute that success to my straightforward, honest approach. Not one party can fix all problems — we need a Senator who works well with others.

The people who live here haven’t changed, but their attitude towards government and politicians have. They are tired of the insiders, and want people who are willing to work together for a common cause.

Yes – this should have been addressed a long time ago. My opponent was in office when the current laws allowed these predators to set up shop – now he says he has a plan to eradicate them. My opponent has shifted the discussion from a meaningful conversation on economic development to an election year conversation focused on his priority of a one focused area. My opponent wants to solve every concern by raising taxes.

The ACA has created more problems that it has solved because it was pork barreled. At the end of the day, we must create a healthcare safety net for our citizens. We cannot put the burden of this program on the business owners and the middle class. This is a great question for a current legislator as to why something hasn’t been done already. My goal will be to bring people together to find a compromise that solves the problem.